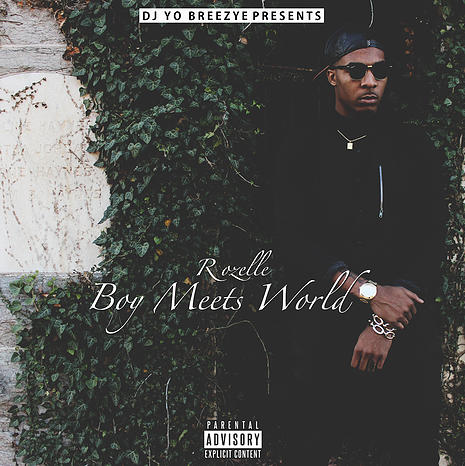 Rozelle comes in strong with his first solo EP, “Boy Meets World” which takes hip hop and r&b into a blender and gives you the best of both worlds! Rozelle teams up with other Nashville big names like TerryWayne and Wilx who takes the idea of play on words to a new level with, “P.U.” This debut project is excting and filled with a variety of hit records.

Rozelle is an up and coming music artist, songwriter, and engineer from Nashville, Tennessee. Pleased to present you with the poetic flow of Wale, the versatility of Drake, matched by the profound lyricism of J.Cole, Rozelle will undoubtedly make a name for himself in 2015 and years to come. With his unique voice, versatile songwriting, and unrivaled pursuit for success, Rozelle demonstrates his ability to express content about his personal life, allowing listeners to relate and make a deep connection through his poetic and rhythmic lyricism.

Rozelle is out working hard to get his name in all the blogs and to get in touch with all of his fans. Rozelle will be releasing a four part acoustic set to accompany some of the songs on his EP by the middle of 2015. In addition to that Rozelle will soon be performing at various shows throughout Nashville and the surrounding cities. Rozelle’s hard work has been published on Dream Technicians (www.dreamtechnicians.com) a Nashville blog, who went deep inside the inner workings of what Rozelle has to offer.

You can also view Rozelle’s latest work on his website at www.itsrozelle.com