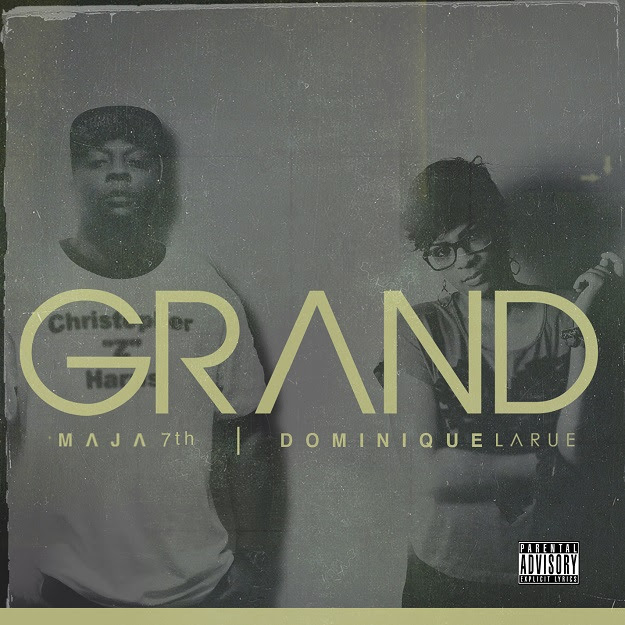 After over a year of working this project aptly titled ‘GRAND,’ Anderson, IN born and raised producer Maja 7th and Columbus, OH’s own Dominique Larue as a newly formed duo, have put together an 8 track extended play of cohesive rhymes and production. Maja 7th is the epitome of musicality with his background in music theory, aswell as being highly skilled on piano, french horn and trumpet. This one producer, one emcee project brings you some of Dominique Larue’s most personal lyrics to date with songs like‘Freedom’ and ‘Feels Good,’ the album also showcases her fun side and highlights her underrated storytelling ability.
‘GRAND’ has minimal collaborations with only Columbus based artist features, in Valure, Micah Robinson and Kim Joyce, which first and foremost allows Dominique Larue to convey her own brand of raw emotion on each song alot more freely than some of her previous offerings, over this well crafted, distinctive Maja 7th soundscape. The #GRAND album release party will be held on March 15th in Indianapolis, Indiana at Sabbitcal, presented by BringingDownTheBand.com, there will also be a Columbus, Ohio release party this April 4th at Double Happiness.
—————————————————————————————————————–
DOWNLOAD: AUDIO MACK© | BANDCAMP™ | iTUNES®
—————————————————————————————————————–
01.) Attucks
02.) Freedom (feat. Micah Robinson)
[Directed by Red August]
03.) So VIVID
04.) Feels Good (feat. Valure)
05.) HAPPYNESS
06.) Seems Like Heaven
07.) Just Becuz
08.) Paint The Town (feat. Kim Joyce) [Album Version]
09.) Get The Money [Bonus Track]
[Bonus Video] #SOON
[Directed by HU Media]
*Executive Produced by Maja 7th [of Dyso Music]
*Written & Performed by Dominique Larue
*Artwork & ‘Freedom’ Video Directed by Red August