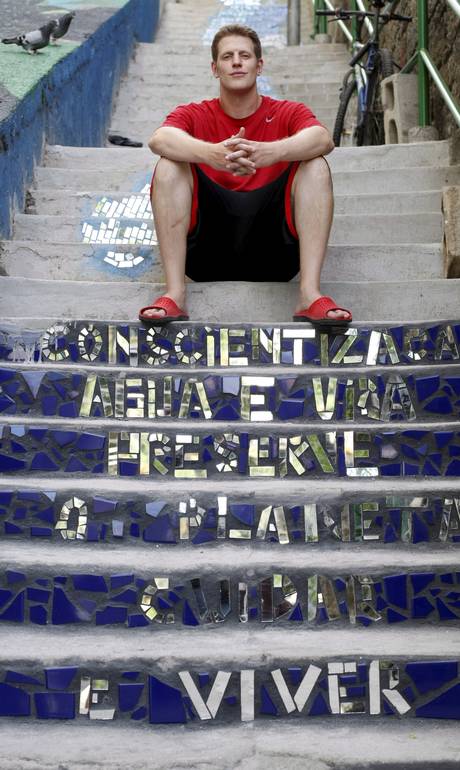 RIO – A little over a week, access to Ladeira Tabajaras the staircase of Santa Clara Street became more cheerful. However, the beauty of the tiles placed on the steps by the American rapper Don Blanquito has a challenger background, as the lyrics of their songs.

– Made a waterfall that will tapering. It was the way we found to make people aware of the water problem. If consumption continue cluttered, we end up dying of thirst. People have to have education. Not only here in the favela, but on asphalt and around the world – argues.

Don Blanquito is so. Says what he thinks, without mercy. He has not forgiven or South GLOBE-Zone team, which came late to the marked location for the interview.

– It puts this talk of traffic, no. You Cariocas are very “little chat”. But it is quiet, I strap myself in this way means 171, means good square of you.

He also identifies with this way, claiming to be the synthesis of Rio. No wonder, when first attended the film “City of God”, in 2002, Don Blanquito became fascinated by life in the slum and began to wonder live in Rio. Two years later, the rapper, who lived in Los Angeles and worked the administrative department of a multinational events area, came to visit and town for a week and went on to make sure there was born in the wrong place.

– Here’s sea and mountain. And women have butt and chest – says in jest, regardless of the politically correct mainstream – That’s why they call the Rio de Janeiro of the Marvelous City. You have all the other places in the world wanted to have.

In 2007, about to embark for New York from Miami airport, Don Blanquito fell in love with a Brazilian awaiting boarding for a flight to Puerto Rico. He approached the girl, struck up a conversation and decided who would live in Brazil to be with her the minute he finished his MBA in Finance.

In carnival next year, a few months ago in the city, he has collected sufficient amount of slang and profanity in order to create his first rap in Portuguese. The music came from a situation which, for him, that he was already a legitimate Rio, seemed an offense.

& MAY NOT BE TRANSLATED CORRECTLY, VIEW SOURCE FOR FULL STORY…