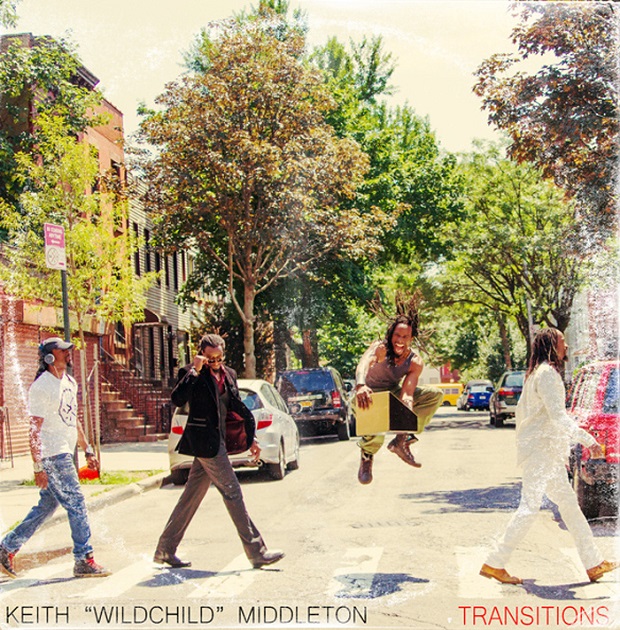 A mainstay of the NY underground Hip Hop scene, rapping and producing for his group HYDRA and his crew The Plague, Keith “WildChild” Middleton is also a lead performer in the cast of Stomp. Keith has traveled the globe, has been featured in commercials for McDonalds, Volkswagon, Toyota, and Honda, has starred in the hit iMAX movie “Pulse: a Stomp Odyssey” and various films and television shows from Sesame Street (with Elmo) to Third Watch (alongside DMX) to The Oscars (twice!). To say he is a versatile performer is an understatement. A true renaissance man, WildChild also teaches body percussion globally and was a comedic choreography consultant for the animated movie “Robots.”
“TRANSITIONS” LINKS:
http://mcmi.bandcamp.com/album/transitions
https://itunes.apple.com/us/album/transitions/id913711121
Having been a team player for years, in Stomp, HYDRA and The Plague, Keith is now branching out on his own, releasing his debut album “Transitions” on MCMI Records. An absolute labor of love, that came about after a near fatal car wreck made him realize that “Carpe Diem” would be his mantra, the spoken word/fusion album includes soul, funk, jazz, afro-beat, dance and Hip Hop, all music and tracks composed and produced by Keith himself, with guest appearances by HYDRA and a vast array of accomplished vocalists and musicians.
The title “Transitions” is self-explanatory, as Keith chronicles his transition to manhood, independence and self-fulfillment, including everything from relationships, to addiction, to honor, to the birth of his children. But its not all deep and serious, Keith has something for the playful, the dance crew, the MC, the poet, the lover and the fighter. Release of the physicals will be announced along with the Album Release Party, in the upcoming weeks. Checkout the first single/video off the album, “FeelsGood,” directed by Brandon Polanco (3 of A Kind Productions).
“FEELSGOOD” VIDEO:
https://www.youtube.com/watch?v=D07I_lbFQkc