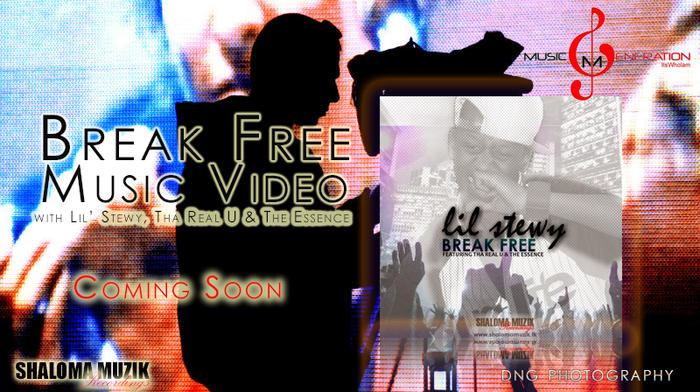 Last year November, Lil’ Stewy became the first new Shaloma signee to debut on the label with his release of ‘Break Free’ featuring Tha Real U & The Essence. The Essence who at the time was solely a label producer and key to additional vocals, joined the label’s roster full time as an artist last week Monday, ahead of his first music video appearance.

The song has made the most waves ever for the label on various music blogs, online indie radio stations and social networking sites, one being Twitter where the song is constantly shared by various music accounts. Upon release, ‘Break Free’ accumulated 100 downloads in exactly 3 hours and 38 minutes on Soundcloud, instantly becoming the label’s most-rapidly downloaded song.

The label first met the 100-download milestone in November 2012, three years ago with the release of Tha Real U‘s ‘That I’m Dreaming‘ featuring Jempas, a song Real U felt was notable enough to make reference to in his reflective ‘Break Free’ verse.

‘Break Free’ further accumulated success by obtaining another 100 downloads, on DataFileHost respectively. In addition to that, during the week of December 14 last year, ‘Break Free’ notably charted for two-three weeks, holding the respective #7 position on the chart of ‘Most Downloaded Singles In 7-days’ on a Ghanaian music website.

Seyda from CPT Street Mag described the song as “not one of these typical tracks we get forced to download everyday”. Whilst he noted the rareness of the song, Seyda added that ‘Break Free’ is an inspirational track with inspiring verses and a well made hook.  “It may not be something fresh to some but it’s DIFFERENT and Dope.”

The music video is currently being shot and directed by label partner, DNG Photography. Supporters can expect to hear more from the label over the next few months as the label is currently working on it’s collective mixtape. Keep a watchful eye as you’re set to be surprised at what the label has to offer shortly.